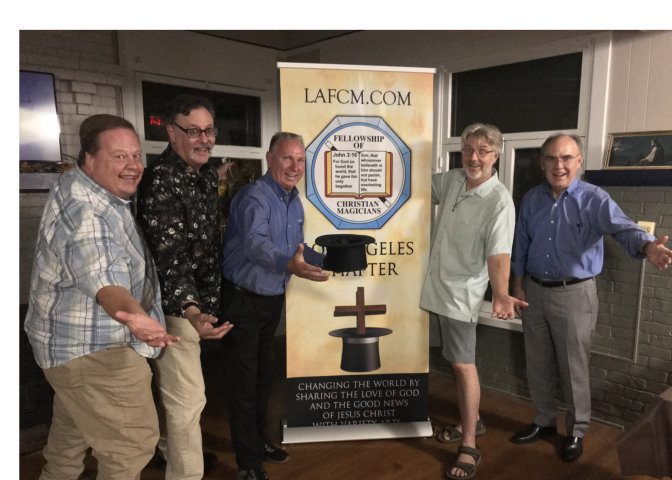 The photo above is from August...come join us and get YOUR face in our NEXT photo!

Due to many folks not being able to make it to the meeting tonight we are rescheduling to NEXT Monday night, October 22, 2018.  Also the meeting will be at the following address at 7:30 p.m.
Highland Park Christian Church
4900 North Figueroa St.
Los Angeles, CA 90042

Since we are meeting at the church this month, this would be a GREAT night to invite (and bring along) folks under 21 years of age...

The Magician’s Workshop is about you bringing something to share that you are working on and want to honor help and feedback on. We will have our usual $5 raffle, come prepared for a good time.

We also want to do an after action report on September's Community Magic Show - Truth and Illusion part 3.

Barry Mitchell will be our guest in our January 28th Meeting. He was well received when he was with us a couple of years ago. You will want to invite a guest or two. However our meeting will held at Harvey Simpson’s Church so younger friends can come. He will also be bringing product to sell (the Castle has concern about that). Mark your calendar, we will be announcing more about that later.

Husband, Daddy, Follower of Jesus and His Word! - 2 time past president of the Fellowship of Christian Magicicans, Los Angeles.